When choosing your garden lighting it's important to understand the lighting effect you are looking for. When garden lighting is planned well it should add atmosphere and depth to your garden. Using spotlights for example, you can create both silhouette and shadow as well as light and shade. Plug and play light lends itself perfectly to the fact that you can move your lighting easily until you find the position with the most aesthetically pleasing result. 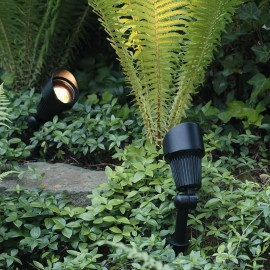 Garden spotlights are great at achieving atmosphere and depth in your garden. Commonly used for lighting features within your garden such as the underside of larger foliage, trees, fountains and statues. When choosing garden spot lights it's important to consider the height of the object and what you are trying to achieve. 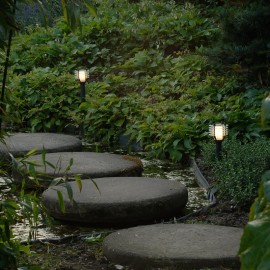 Lighting garden paths is very suited to garden post lights. If your path runs next to a border then when choosing which garden post lighting you want to use should be based on not only the design you like, but also the depth of your foliage. Borders with deep or thick foliage and planting would suit something like the Larix post lighting. Sparser borders would be better suited towards smaller post lights such as the Linum post light. 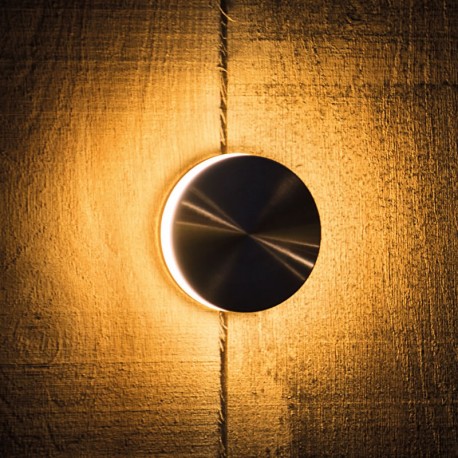 With its ability to be mounted on wall, fences, trees and sheds outdoor / wall lighting certainly has many uses. It's important as always to first (as always) decide what your trying to achieve with your wall lighting. Lights such as the Palm and Aurora are very low powered and should really be seen as a decorative light rather then functional lighting. While at the other end of the spectrum the Gilvus and Sibus are easily capable of being used as functional lighting and could be used to light alley ways for example.

Decking lights & up lights are not only attractive to look at but also a very valuable safety addition. Whilst the smaller lights in the range such as the Alpha and Astrum decking lights are designed to just illuminate the edge of your decking, more powerful lights in the range such as the Rubum decking light with its adjustable angled 5W lamp (bulb) is powerful enough to light pot plants and other features standing on your decking. 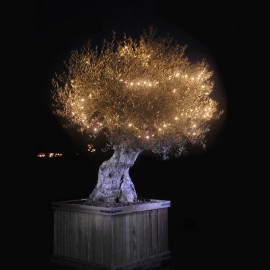 Decorative garden lighting is lighting that has no beneficial lighting for objects around it. The lighting is decorative and therefore becomes its own feature. Lights in this category include ball and sphere shaped lights such as the round 30, festoon lights and fairy lights that can be hung on trees, bushes and fencing such as the Linea string lights. 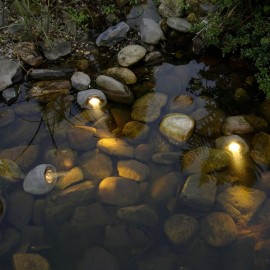 Underwater lighting / garden pond lighting can be used both submerged under water or out of the water. This gives it great versatility as it can be used to light underwater features as well as being used on the edges of ponds to light waterside features. As the lights in the Techmar range are all low voltage (12V), they are completely safe for both aquatic life and plants. Easily the most popular in this range due to their rock-like appearance is the Lapis underwater light.

Why Use 12V LED Garden Lighting?

Using LED (Light Emitting Diode) garden lighting rather then conventional halogen filament based lighting is beneficial for many reasons. Firstly there are the benefits relating to lower running costs and lower maintenance. LED light bulbs have a much increased life expectancy over halogen so you can literally enjoy your lights for years without the need for changing the bulbs. There is a definite advantage as well when it comes to saving energy. LED garden lights on average give you 80% energy saving. Lets be honest, with us continually being told to be greener and save the planet, LED bulbs are obviously one small change we can all easily make.

We Will Never Be The Cheapest LED Garden Lights Available!

Saying we aren't the cheapest LED lights available seems a strange thing to say, especially due to the fact that we are trying to sell them, but allow me to explain. In the past LED bulbs to be honest were not quite as good as people made them out to be. Many bulbs took a while to illuminate and light output was poor. Even though this is no longer the case, many people still believe it to be true. This mainly is due to the amount of cheaply made imported LED lighting products you often see for sale on certain auctions sites and the like. Because we don't sell cheap garden lights that, let's be honest, most people would want to return, we know that there is hundreds of alternative products out there that will always "appear to be" a much better deal.

At the end of the day, you get what you pay for. If you want all the benefits of modern LED lighting technology, you need to buy quality LED's. While we would never say that Techmar LED bulbs are leading the way, they are quality and more then capable of giving you instant, bright and clean garden lighting.